Part three of this four-part column sees the author talk about losing (and eventually finding) her cultural identity while living in a new country.

I still remember the faces of my friends and family when I told them I was planning to move to Mumbai in 2016.

“How will you manage?”

The idea was very foreign to them. For, many of them had left India decades ago looking for better opportunities, and in the hopes of achieving the 'American Dream'. To go back and struggle again was a concept they couldn’t wrap their heads around, especially for a young girl who was brought up in the US.

Even now, six years later, this 'reverse migration' is often met with skepticism and curiosity. The idea that someone who was brought up in the US, moved back to India for good, still seems unfathomable to them. I can’t blame them either. Despite being an Indian, I knew nothing of my cultural identity because I had spent my entire life adjusting to another culture.

My family moved to America in 1990, due to the Gulf War. I was all of two years then. We were an immigrant family in an unknown territory. We had to start afresh. Our migration to the US wasn’t planned so it was extremely difficult for us in the beginning. My parents tried their best to stay true to our roots, but we had to assimilate quickly and eventually lost those links back to our culture. As kids, we eventually stopped speaking our mother tongue and responded only in English. Telling friends of my Indian background only led to bullying, humiliation or confusion, so I eventually just stopped talking about it. The few attachments we had to our roots were the telephone calls to our grandparents living in Kerala. With the telephone companies charging $1 per minute in those days, our calls never lasted more than five minutes and conversations never went deeper than exchanging a few pleasantries in our broken Malayalam. “Appacha! Kechamo?!” “Yes mole, I can hear you!”

Trips to India were also seldom. Every few years, we’d go and spend the summer there, my siblings and I dragging our feet the whole way. As young kids, the idea of spending the entire summer in India did not excite us. While nothing made us happier than seeing our grandparents, visiting distant relatives, living with insects, and dealing with the Kerala heat were all things we were happy to be without at the time. My mom would even pack us “American food” like spaghetti and meatballs from the US, as a respite from all the constant Keralan meals. My grandfather didn’t mind and would join along. I still remember his failed attempts to eat spaghetti with a fork and spoon. He quickly gave up and ate the spaghetti with his hands.

Growing up in a predominantly White neighbourhood, I didn’t have much exposure to Indian culture outside our church community programmes. I was often called a “coconut”, a derogatory term coined towards Indians by Indians that you would never use today. Brown on the outside, White on the inside. But frankly, that’s what I was and remained.

I didn’t realise how disconnected I was from my roots until after I moved to India. I was now this American in India and I stuck out like a sore thumb. I couldn't speak my mother tongue so I would just smile and nod. My entire identity was trying to be accepted into American culture while hiding my own and now here I was, with my culture all around me and I couldn’t avoid it. Living in India was my new reality and I wanted to experience the best way I could so I started to be open to it. The more I learned about Kerala culture, the more I became enthralled. I got to see first hand the history of our heritage and learn about the rich traditions in art, driven by our colorful and vibrant past. I got the opportunity to travel more around Kerala, experiencing its diverse cuisine while taking in the beautiful scenery. 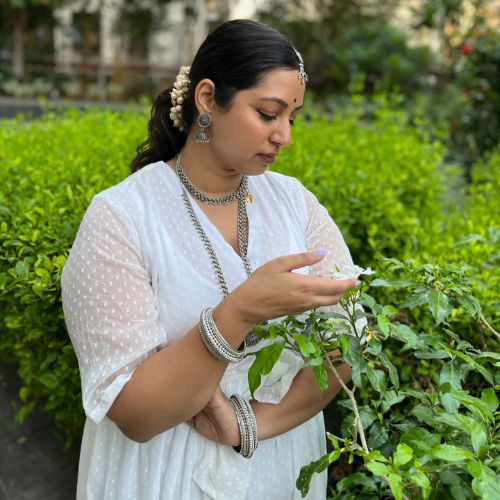 I always encourage those who have the opportunity to come live in India to do it, even if it is for a short time. There is an unmatched richness and vibrancy here. I found myself rediscovering my roots in a way I never thought was possible. The world is also a lot different now. We no longer have to hide our background but instead wear it proudly on our sleeves.

My occassional trips to Kerala are now once or twice a year and each time I visit, I feel my cultural identity strengthening. My grandparents have long since passed away, but I always wonder what they would have thought of their granddaughter coming back to live in India. I think they would have been really proud. I have a new profound appreciation for my heritage, background and culture that I never had growing up in the United States...

…but just don’t ask me to speak in Malayalam though.