Almost like NYT’s chickpea toast, a spread of spiced white peas is smeared inside the dosa found in Burma. This is not a bad fusion recipe, but a traditional take on dosa brought to this country by the Tamilians. In fact, Burma’s food is a lesson in shared recipes, influence of migration, and making the most of local produce. Back in India, Burma Burma is the all-vegetarian restaurant that is bringing the region’s food to the forefront. With six outlets peppered throughout the country and three more on the way next year, there’s never been a better time for this cuisine in India. Through a photo essay for Bazaar India, restaurateur Ankit Gupta and chef Ansab Khan from Burma Burma, take us through the bylanes of Burma where they go looking for inspiration. 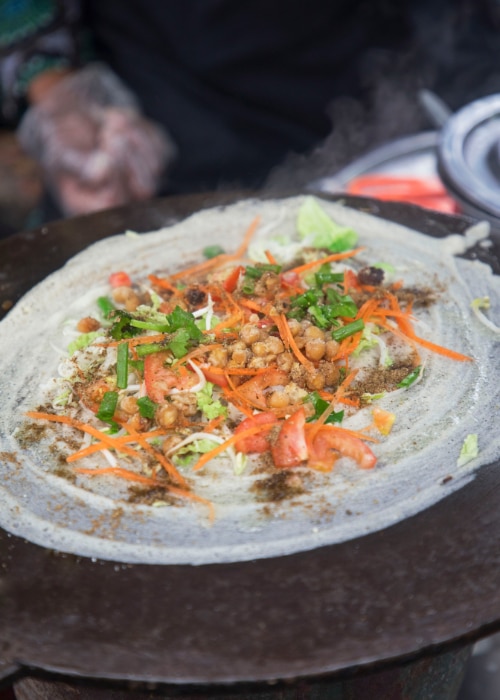 Dosa, known as kee mar in Burma, is a common street snack influenced by the Shetty community of India. The crepe has two avatars in the country–the savoury version is stuffed with bean sprouts, vegetables and a generous sprinkle of black pepper while the sweet one features roasted palm sugar and fresh shredded coconut. 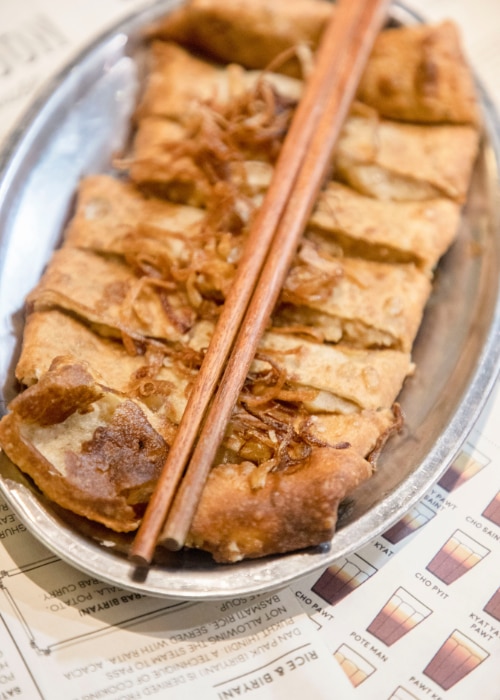 Nothing exemplifies an Indo-Chinese influence on Burmese cuisine like a plate of palata (or samuza, Burma’s take on samosa), which is a popular tea shop snack. Similar to its Indian cousin paratha, it is made with whole wheat flour but then is stuffed with fresh peas and topped with fried onions. The unique twist? You’re supposed to dig in with chopsticks. Samuza, inspired by India’s samosa, gets transformed into many dishes in Burma. Find it dunked in soups, known as samuza thouk, or snack on it in salads, known as samuza thoke. Or enjoy it tossed with lentils, chana, onion, cabbage and tamarind water, in a dish called samuza hincho. Tea leaves being processed for making laphet in Shan state, not different from the tea estates of Assam. Strikingly similar to the floating markets of Kashmir, the floating farms on Inle Lake grow everything from bottle gourd and eggplant to water spinach and morning glory. Tomatoes grow widely too, and are an integral ingredient of Shan-style cooking. The khow suey we enjoy today came through Indians who migrated from Burma during World War II. It has its roots in the Burmese version, which has at least six variations. The fragrant Shan-style ohn no khauk swe is loaded with rice noodles, tomatoes, and peanut chutney and is lighter compared to the more robust version found in Mandalay. The vegetables that go in the dish are freshly plucked from the surrounding ‘wet markets’ in this region. Soybean discs feature commonly in Burmese cuisine. The umami-rich ingredient is made from a fermented soybean paste called tua nao that adds a unique depth to regional dishes. Locals eat the fermented discs by breaking them into shards and tossing them with onions and chillies for a quick salad. In India, this fermented soybean paste is known as axone (akhuni) and is a ubiquitous ingredient in Naga cuisine. Burmese salads, called thoke, are more like juicy slaws. While laphet thoke is the most common one, made out of moist fermented young tea leaves, other produce is also pickled and used to whip up salads like gyin thoke—a young pickled ginger salad with crunchy nuts and lentils. Slaw-like salads are a mainstay of North-Eastern states too, like Manipur’s singju that is made with perilla seeds and lotus roots, or the ushoi kangshu, which is made with young bamboo shoots, fermented fish, and chillies. It doesn’t get heartier than mohinga, Burma’s national dish. Traditionally eaten for breakfast, the lemongrass and turmeric flavoured soup served with rice vermicelli packs quite a punch. Mohinga reflects on the similarity between Bengali and Burmese cuisine through shared ingredients like catfish and banana stem.

All images by: Anshika Varma