#BespokeFootwear: A truck art spin has got sneakerheads in knots

A Pakistani truck artist on his journey from trucks, to cars, bodies, murals, airplanes and now collector sneakers.

You can see the making of a long day of work as Haider Ali settles down, cross legged on the floor of his rooftop studio, his paints and brushes scattered all around him, his latest canvas right in front. We’ve all had deadlines to meet, and Ali’s is based on a client who wants a 1500$ artwork—her limited-edition pair of sneakers to be painted in Ali’s signature truck art—completed and ready for travel before she flies out.

There is nothing like art that transcends culture and tradition to become part of one’s identity, and this could not be better documented than through the journey of Ali, a third-generation truck artist who has in the last few years taken his work from the trucks to the art galleries, walls, bodies—even airplanes—and his latest, shoes. “It started when a lady reached out to me to paint her shoes. I thought it was crazy, and just to get her to say no I quoted $500,” laughs Ali. Turns out, the lady was not discouraged, and that one pair led to Ali being commissioned for many more pairs.

And for Ali, this journey started right at home, at his father’s workshop, where he, as a seven-year-old, first held a brush.

“In a strange way, the paints and brushes became my toys and also my friends,” says the 42-year-old artist.

As a child born to a family of truck artists—from his grandfather, to his father, and uncles—the training to become one started early and was compulsory. But he is the only one who continues to paint in his family, the call of the consistent income of daily jobs being more lucrative for the others.

In Pakistan, where the love for truck art is imminent in the colourful lorries that dot the highways, the history of it dates back to the 1940s when hauliers crafted vibrant logos to market their brands to a largely illiterate public. Or, as the other story goes, it began with bus drivers working to lure in passengers before it spilled to trucks. Whatever the story, today truck art is an integral part of Pakistan’s trade. And Ali, with his tinted glasses and jaunty gait is somewhat of a celebrity in the art. “I have to keep painting or else the ideas will dry out,” says Ali. And Ali’s creations range from traditional floral designs, birds (a lot of peacocks), to kohl-rimmed eyes, and motifs—all painted in iridescent hues that can be spotted from a mile away.

For Ali, he first found the spotlight outside of Pakistan as an international ambassador of truck art when his work was exhibited at the US Smithsonian Museum in 2002. Since, he has used his craft to paint a plane (a VW Beetle), an exhibit for the Museum of Peace in Amritsar and the walls of the Pakistan High Commission in New Delhi, and even a woman’s body at the Burning Man festival in the United States. Recently, he made headlines after he honoured George Floyd and the Black Lives Matter movement with a mural in June 2020. “Hum kaaley hain tou kia hua, dil waley hain (So what if we’re dark-skinned, we’ve got big hearts)”—read the mural—along with another phrase that read “Goron ki na kaalon ki, dunya dil walon ki” (This world belongs neither to whites nor blacks, only for those with big hearts).

Since he started painted shoes in January 2022, he has completed eight pairs for celebrities from around the world. “I now charge from $500-1500 for a pair, depending on the intricacy of the art.” 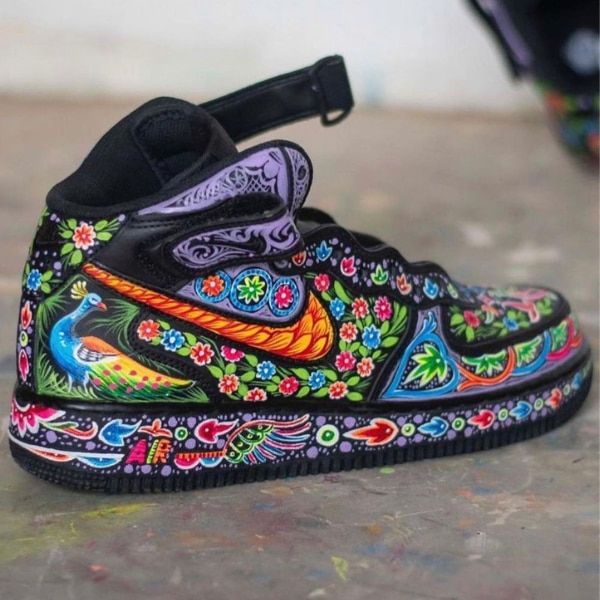 The recent custom rules have slowed down orders, but not dampened Ali’s spirit towards the art. So passionate is he that he has started a school to make sure he trains the next generation to take over, including his own children. “Of course, along with regular school. But it is important that I pass down our culture and heritage to the younger generation.”

That his art on the trucks and the shoes will wear off, crack, and fade in the next three or four years, ready to be painted fresh again, is only more motivation.