The actor speaks to Bazaar India about being spontaneous, choosing the right films and what scares him as an actor.

I love actors who mean business. Which is why, getting to chat with Vicky Kaushal, a man who almost always plays characters that have their priorities and goals sorted, had me intrigued and excited. Yes, the josh (enthusiasm), very much like Kaushal’s as Major Vihaan Singh Shergill in Uri, was high. In this exclusive interview with Bazaar India, Kaushal tells us about his next goal since the release of his latest film, Govinda Naam Mera. He also speaks about the roles that he wants to play in the future, his first wedding anniversary, and being part of the Blenders Pride Glassware Fashion Tour with Kunal Rawal.

As far as plans go, the best plan for Kaushal is to have no plan. “I don’t actually (plan things). I don’t have a flow chart. The only plan I have is to give my best in whatever I do on that particular day. That’s how I want to live.” While he doesn’t give much thought to planning, he’s definitely aced his timing with regard to choosing the right films. “For me, the first thing about choosing a movie is about being part of a great story. I just want to be affected by the story as a member of the audience and not as an actor to who the story is being pitched. If the story moves me and is something that I resonate with, only then do I feel I will believe in the movie and ask people to watch it.” 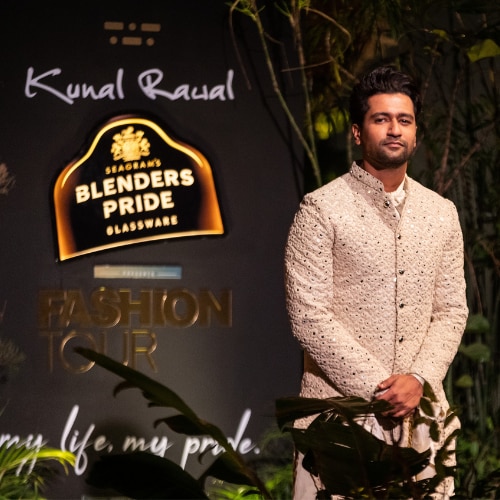 This very passion and energy to do more and to do better is a major reason why the star joined hands with designer Kunal Rawal to be part of the Blenders Pride Glassware Fashion Tour, one that celebrated expressions of pride and authenticity among the youth of India. “Kunal Rawal has redefined fashion in his short, but a no-brainervery powerful, journey of 15 years. He is a dear friend and it’s so amazing to see his creation and his passion. I love his spirit and his energy. I love how passionate he is about creating a good fusion when it comes to fashion, and I genuinely deeply relate to and love what he makes. So it was a no brainer for me to be a part of this beautiful journey by Blenders Pride Glassware Fashion Tour and Kunal Rawal.”

If you’re wondering what makes Kaushal a better actor, it’s his quest to try out the unexplored, for there is a fear hidden in them. “Cinema is a director’s medium. Who’s directing that film, who’s making it, what’s their vision—that’s what matters to me. Along with that, there’s also the character—whether it is something new that I haven’t done before or if it has something new to offer. Does that scare me? Does that make me nervous about being able to pull it off? I often ask these to myself, because the opportunities that scare you, at the end of the process, help you develop a bit more confidence every time.” He may have broken a million hearts by getting married last year, but Kaushal, who celebrated his one-year wedding anniversary with Katrina Kaif is enjoying what he calls the ‘best chapter of his life’. “It’s the most wonderful feeling to have a companion with whom you connect, who understands you and who you understand thoroughly. Because it puts you in a peaceful, blissful state of mind that makes you feel loved all the time. It just brings out the best version of you, which is the most beautiful state of mind to be in. And I think having Katrina as my companion for life is just the most beautiful thing to happen.”

While we cheered him on watching him pack a punch in Govinda Naam Mera, there’s simply no stopping Kaushal, who has a chock-a-block calendar for 2023. What’s more, his fans will get to see him in uniform, again. “At the moment, I am working on Sam Manekshaw, directed by Meghna Gulzar. It’s exciting to wear the uniform again after Uri. Govinda Naam Mera just released and I’m grateful to receive so many kind reactions to this film. Apart from this, 2023 will hopefully see other projects release, including the films I am shooting with Dharma,Maddock Films, and YRF.”

Glasgow and Edinburgh: A window into the classic Scottish culture

How to build a modest wardrobe