It’s time to dig deep into the perfect cover-up story.

A story may be told in many languages, but as long as the soul of the tale stays intact, the world and its people will continue to be enamoured by it. One of the biggest examples of this in the world of cinema is Drishyam, made first in Malayalam in 2013. The audience couldn’t help but be gripped watching Georgekutty (played by the marvelous Mohanlal) dig deep (quite literally) to protect his family at all costs. What followed were countless remakes of the original—Drishya (2014) in Kannada, Drushyam (2014) in Telugu, Papanasam (2015) in Tamil, and Drishyam (2015) in Hindi. What started with Mohanlal, soon saw stellar actors such as Kamal Haasan, Venkatesh and Ajay Devgn pack a punch in the Tamil, Telugu, and Hindi versions, respectively. One very fascinating story, multiple names. But what stayed the same was the movie’s impact.

And it wasn’t just restricted to India. The Drishyam universe spread to foreign lands; it was made in Sinhala as Dharmayuddhaya (2017), in Mandarin Chinese as Sheep Without a Shepherd (2019), and will soon be released in Indonesian.

There was no stopping at one as we got a Drishyam 2 in Malayalam (2021) as Georgekutty was back in our lives showing us how he’ll always be a step ahead of everyone. This Friday, Hindi-speaking audiences witnessed the madness unfold as Vijay Salgaonkar (Devgn), very much like the meaning of his first name, claimed victory in the sequel. 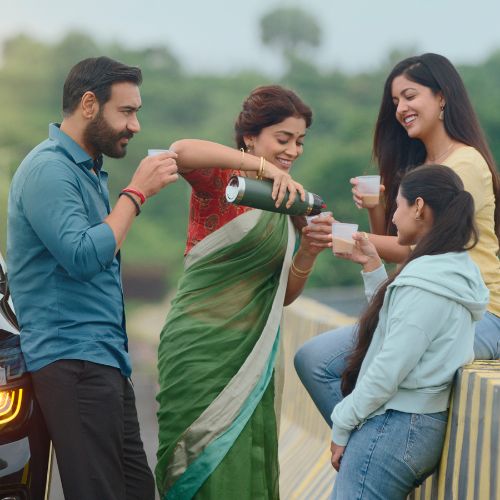 I’m not going to waste words by comparing the two and getting into the whole South-Hindi remake debate. What I am going to do is appreciate just how good the source material is, and how the adaptations and the actors in them have done absolute justice to it. Long story short, we will always appreciate Drishyam and Drishyam 2 regardless of the language and who the lead protagonist is.

That said, while we stay away from drawing comparisons, we certainly must question what is it about this gripping franchise that continues to keep the audience at the edge of their seat. There must be something that works; something that the audience, no matter which language they speak and understand, hasn’t gotten bored of. What is it that continues to leave them in awe?

My friends, this is exactly what happens when you have a story as the hero. Everyone loves it, no matter who’s starring in it. When you make a movie with your heart and keep its soul intact in the versions that follow, there is not much margin for error. We can just be happy that something can be made n number of times and still have the same effect as it did when we first saw the magic unfold. And thanks to this, we get to watch which protagonist gets it right and where. I’ve lost count of the number of times I’ve asked myself, ‘What did Mohanlal do better than Devgn (and vice versa). Who among Mohanlal, Devgn and Haasan keeps the best secrets?’ Well, I’ll leave that up to you to figure out. Barring a few minor changes, a majority of the Hindi version of Drishyam 2 is just like the Malayalam original. Ajay Devgn clearly stands out in the movie. He doesn’t need dialogues to add to the intensity; his eyes, expressions, and charismatic walk are more than enough. The character of IG Tarun Ahlawat (Akshaye Khanna) is a welcome addition here and makes us wish that we got to see more of the actor who is an absolute scene stealer. And how can we forget the countless references to what happened on October 2 and 3 that are now etched in our memory. “Biwi ka birthday bhool sakta hoon, October 2 aur October 3 nahin.” says a character in the film that will make you laugh, yet nod in agreement. Where to get the best pav bhaji in Panjim? Just ask the Salgaonkar family.

Is body pigmentation really an ‘issue’ that needs to be fixed?

Maintain a healthy scalp with these 7 products