Think of what a place reminds you of, and the first image that comes in your mind is what the world wants you to believe of it. Think of Indonesia and a travel show reel may start to play for you—white sand beaches, luxury villas, cheap travel, Balinese massages, temples and spiritual healing, and the sun, lots and lots of sun. But like that one quiet friend we all have, who has so much more to say, Indonesia has so much more to show. There’s a lot more to this archipelago of 17,000 incredible islands, and Bali is just one of them!

When I set out on my trip to Indonesia, the itinerary was clear—to avoid everything that the popular travel documents and attractive marketing had to show and instead discover all the hidden gems dotted across the islands. I wanted to know the country beyond what it's quintessentially acknowledged for. 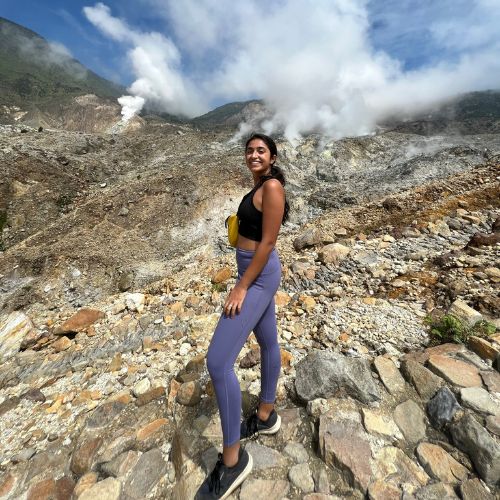 I started out by taking a short flight from Bali to Java, an island bestowed with magnificent volcanoes, some of the largest ancient temples, and the most glorious waterfalls on the planet. Could I resist climbing some of these dizzying peaks? Duh, of course not. And my first hike here was no ordinary one—it was a climb with a view and a peak like no other—Mount Papandayan in West Java, an active volcano, surrounded me with sulphur pools coloured in hues my eyes couldn't comprehend and dead forests spookier than the horror movies I’ve watched. 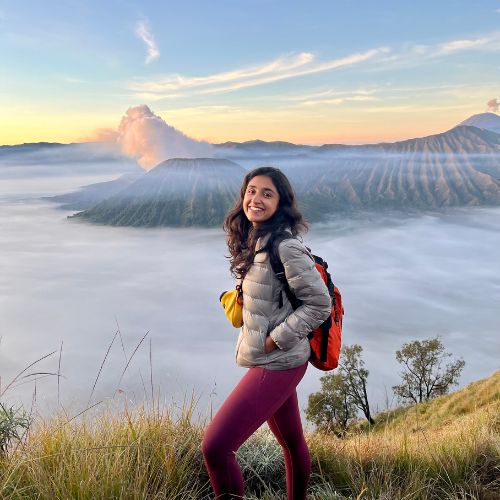 Now, given that the country has 150 volcanoes, wouldn’t climbing just one be, well, trivial? I had to climb some more, and I did two—Mt. Bromo and Kawa Ijen. They were both sunrise hikes, and one of the biggest takeaway from them was never to take sleep for granted! But that in itself made the hikes all the more special. The journey from Malang in East Java, all the way to the base of Mount Bromo, started as early in the day as early goes, and as the sun came up—the sky changing colours from purple, to pink, to a bright orange, a blanket of clouds surrounding the Bromo Crater—made Mount Bromo a sight to behold. And if that wasn’t enough, we hiked up the crater until we were standing ON the edge of a volcano puffing smoke. This was a geography lesson I’ll never forget. Our planet is truly diverse and some landscapes can challenge our wildest imaginations! 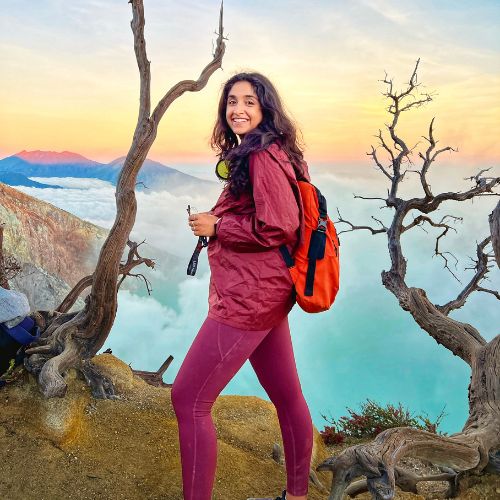 After another sleepless night, I took a bus to Banyuwangi, where I embarked on my next trek, this time to witness the sun rise above the most toxic lake in the world. Another 2am wake up call, and we were equipped with headlamps, gas masks, and a childlike excitement. Innumerable shooting stars kept us company as we made our way down to witness the “blue flame”, a natural wonder only found in Indonesia, Ethiopia, and Iceland. But Kawah Ijen is beyond a tourist destination, you will find yourself surrounded by sulphur miners walking up and down the crater, carrying over 90 Kgs of cooled sulphur rocks. This is one of the most dangerous jobs in the world given the health risks involved. I would recommend leaving the sulphur miners a tip when you’re there. The hike ended with the sun spilling over the lake, which happens to be one of the most beautiful lakes I’ve ever seen. The aqua blue is hypnotising, and, I can assure you, it’s nothing like you’d have ever seen before!

If the plan was to climb Indonesia’s peaks, boy, did the country fulfill my appetite. The next on my bucket list was Flores, an hours flight away from Bali. But this time I decided to do it differently—instead of staying on land, I spent two days on a boat! This one was a far ride, all to witness Savannah and climb the rusty volcanic hills. The Padar Hill viewpoint allows you to witness a view of three unique beaches from atop—black, white and PINK! The pink beach is one of nature’s rare marvels and snorkelling with turtles there just adds to the charm. However, our last stop on the boat left me in complete awe of nature. We sailed to Komodo Island, which is home to more than 4,000 Komodo dragons, the largest lizards on earth. These fierce creatures are only found in Indonesia and, if you get lucky, you might spot some dragons lazing around the jungle, like I did!

I tried to see a lot of Indonesia, trying to encapsulate as much as I could beyond Bali. And it only proved to be one of the best times I've had. It's always fun to travel mainstream and touch upon places people talk of, but often we need a new change, an all-new discovery. I wanted the adventure and newness of unturned stones. From spending a day at Komodo Islands, swimming with the turtles and laying on the pink beach, to travelling and hiking up Kawah Ijen, and feeling the sulphur down my nose as I reached the most toxic yet beautiful lake on earth—I ingrained each part of Indonesia in me. Bali in itself was congenial, but I'm so glad I took the leap of faith and explored so much of the country. It taught me the beauty of staying off beat and at the same time the life and liveliness in staying mainstream.

The thrill of travel that goes beyond an Instagram post is what I always seek, and I got exactly that in Indonesia.