Everything Everywhere All At Once lives up to its name. Directed by Daniel Kwan and Daniel Scheinert and co-produced by the famous Russo Brothers, this absurdist science fiction comedy-drama is a multiverse of madness that will leave you asking for more. Originally written keeping Jackie Chan in mind, the lead role was later reworked and offered to Michelle Yeoh. With the world abuzz about this visual extravaganza, here’s why this film is hands down one of the best to have come out this year. The film revolves around the Chinese-American immigrant Wang family where Evelyn Quan Wang (Yeoh) struggles to run a laundromat that is being audited by the Internal Revenue Service (IRS) for tax fraud. On the other hand, her mild-mannered husband, Waymond (Ke Huy Quan), is trying to serve her with divorce papers. Evelyn's queer daughter Joy (Stephanie Hsu) is trying hard to make her mother accept her white girlfriend Becky in front of her strict traditionalist maternal grandfather Gong Gong (James Hong), who has just arrived from Hong Kong—yes, it’s a fractured family just waiting to combust.

Yeoh, known for heavyweight films like Tomorrow Never Dies and Crouching Tiger, Hidden Dragon, gives the performance of her career with Everything Everywhere All At Once. At 60, her pitch perfect action sequences make your jaw drop. Ably supporting her is the brilliant Indiana Jones and the Temple of Doom star Quan, who makes a smooth comeback to Hollywood after almost two decades. From the meek husband, to Alphaverse’s Alpha Waymond (athletic and agile), to the successful and suave businessman, he plays all three versions in three universes with equal elan. Jamie Lee Curtis comes all guns blazing and is part scary and part lovable in her different portrayals of the no-nonsense audit inspector Deirdre Beaubeirdre in one universe and Evelyn's lover in another. But the surprise package is Hsu, who makes you laugh, cry and be petrified, all at once. It makes room for quiet introspection

While ‘verse jumping’ (moving from one alternate universe to another), Evelyn comes across various versions of herself in different universes—from being a successful kung fu master turned movie star in Hong Kong who looks straight out of a neon-lit Wong-kar Wai film, to a universe where humans have hot dogs for fingers, to where she works as a chef in a Japanese restaurant, to another where she is a successful singer, she packs in a punch. The film compels you to think of many possible scenarios and deeply introspect about your own life—what would your life be had you not married your husband? If you would have taken that other job instead of this one? Had you moved to a different country post college? Are you glad you made the decisions that led you to where you are today? 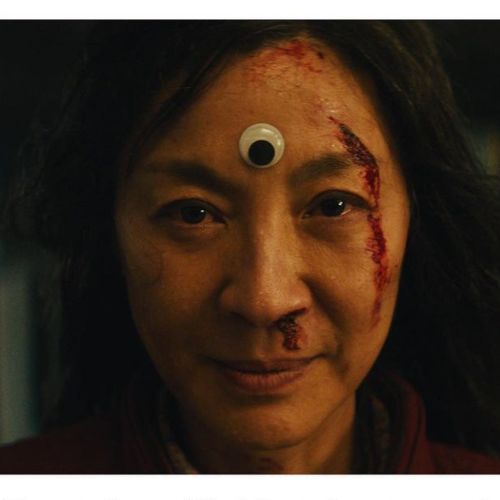 Nihilism vs existentialism
From the meaninglessness of life, to the existential crisis which we all suffer from, the film touches upon it all. It explores the concept of nihilism, where a person rejects all religion and moral principles and believes that life itself is meaningless. The main antagonist of the film, Jobu Tupaki, creates a black hole-like ‘everything bagel’ that puts the existence of the multiverse at risk. However, she later reveals that the all encompassing bagel was created to destroy herself, and not the multiverse, since she believes that nothing truly matters and simply no longer wishes to exist.

The ‘googly eyes’ throughout the film serves the direct opposite purpose of the ‘everything bagel’. Instead of a circle with nothing to fill, it’s a circle with a black dot that jiggles around, thereby touching upon the concept of existentialism. To put it simply, the black circle has nothing that ‘fills them’ which is a metaphor for nihilism, whereas the googly eyes have something that ‘fills themselves’, a metaphor for existentialism. 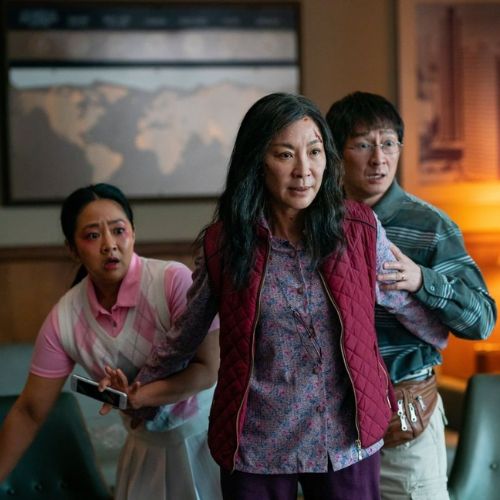 If you keep all the absurdity and the action sequences aside, at the core of it, this is a family saga that touches upon important relationships like those between a mother-daughter, a husband-wife and a father-daughter. Special mention to the existential conversation between two rocks (Yeoh and Hsu) at a cliff where their thoughts appear as written texts. “Nothing really matters. We’re all crap anyway,” says Joy to her mother Evelyn as they sit on the cliff as two big rocks. It’s funny yet emotional. Also, ironical, because hey, rocks don’t have emotions. The film has many such sub-plots that evoke a range of emotions out of you—from sheer shock, to hysterical laughter. And mind you, none of these sub-plots are there just for the heck of it.

The relationship between Evelyn and her daughter Joy has been portrayed with utmost honesty—the struggles of accepting a lesbian daughter as an Asian mother, to the difficulties of accepting that your daughter has dropped out of college—it’s all too real. The scene where Evelyn tries to convince Joy to stay and not walk inside the bagel can be perceived as a person trying to stop a suicidal person to not commit the act and live instead. It also delves into mending fractured relationships of Evelyn with her husband as well as her father. Do they succeed? Watch the film. Everything Everywhere All At Once is an excellent example for film school students on the lengths the marvels of filmmaking can reach if you free your minds from the shackles of classic storytelling. With bizarre and mind-boggling visuals that will make you feel like you’re literally on a rollercoaster ride with super fast editing, jumping from one wondrous universe to the other with wide-eyed childlike wonderment, nothing seems impossible in this multiverse of madness. The fact that there’s heart and soul in this bizarreness is what sets this film apart. Fun fact: Only a five-person team worked on the visual-effects for this film and they learned it from free tutorials on YouTube. Crazy, right?

There are also multiple references to other famous films like The Matrix, Ratatouille, 2001: A Space Odyssey, In The Mood For Love. We are certain you will fall in love with this film which must be experienced in all its entirety. From outlandish costumes and make-up, to a universe where a teppanyaki chef is puppeteered by a raccoon, to men sticking objects up their butt to jump universes—everything is possible here!