Disenchanted Review: Brilliant performances make up for a rushed narrative sans the magic

It’s not the not-so-happily-ever-after we expected with this one, but there may be one important reason we may go for seconds.

It’s been 15 years since we danced to the tunes of Alan Menken and Stephen Schwartz (who won three Academy Award nominations for their original songs) alongside a Disney dream that was doe-eyed Amy Adams (Giselle) in Enchanted—hunting for her Prince…or, what turned out to be a Manhattan lawyer Robert (Patrick Dempsey)—celebrating the unexpectedly delightful revisionist fairy tale—and just knowing there was more to their happily-ever-after was a breath of fresh air we couldn’t wait for.

That Giselle would grow “disenchanted” by life in the New York City—the land where “there are no happily-ever-afters”—should have been our first guess, that Morgan (her adoring stepdaughter now played by newcomer Gabriella Baldacchino) would be suffering from teenage mood swings may have been the second, but Giselle moving the family to the suburban town of Monroeville in search of a more fairytale life was definitely not something we saw coming—not because we wouldn’t bet on Giselle wanting a fairytale life, but because the lack of reasonability of just upping and leaving in the first five minutes of the movie was, well, too much to take.

But, perhaps the lack of reasonability is something we grew to love about Giselle with the first film, and one swiftly moves past that as the movie picks up rhythm (we say rhythm because it has a LOT, might we say a little too much as we agree with Morgan complaining about everyone from Andalasia singing instead of talking, of it this time around) and we try to make sense of all the happenings in the small town.

There is the self-styled queen bee of Monroeville, Malvina Monroe, played by scene-stealer Maya Rudolph, who fits right into the Disney evil troupe as she takes a dislike to Giselle from the get go. And the returning James Marsden as Prince Edward and Idina Menzel as Nancy—godparents to Giselle’s baby daughter—who come to gift her a wand that could make anything come true, setting the plot in motion. 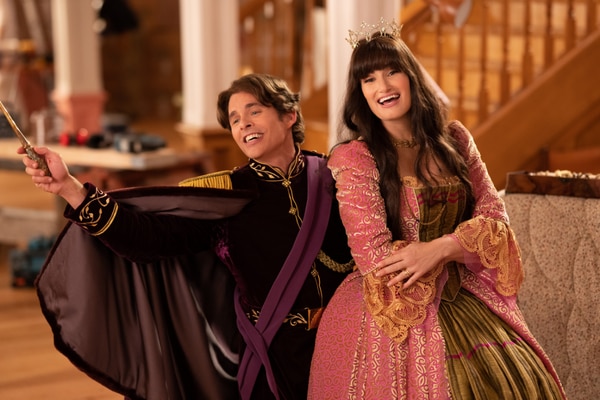 A disillusioned and disheartened Giselle, hurt from being called the stepmother, takes to wishing upon the wand for a fairytale, only to then live through, and fix, the repercussions of the wish—actually becoming an evil stepmother.

The Disney canon is front and centre throughout the film—whether it is the portrayal of the daughter living in the tower under her evil stepmother’s reign, the Prince (Kolton Stewart) falling in love with the humble Morgan, or the final battle between good and evil as Giselle and Malvina rise up to fight to reverse the wish, or not. And yet, the story falters. There are old sparks that one sees—when Giselle establishes that “memories are the most powerful magic"—and new edge when she says “mirror mirror in her hand, who’s the most blatantly insecure woman whose constant need to ask her reflection for validation suggests that what she really needs to do is love herself, in all the land”, or when Morgan marvels at how pointy she is animated. But the sequel is unable to do justice to the rip-roaring Disney fantasy that we had come to expect, and the tale feels like too many ideas, rushed, and cramped into the small window of the film. Perhaps over the 15 years since the first, we have grown up, perhaps we have lost the ability to dream as many dreamy things that Disney asks of us without the need for good satire, or perhaps we were looking for some of the old magic—Giselle charming cockroaches into cleaning her bathtub, or pigeons delivering bouquets—and we didn’t get them, instead we were bombarded with too many unstitched thoughts. But, if there is anything redeeming in the squeal, it is, once again, Amy Adams, whose coming-out party continues with this one—whose brilliant portrayal of the dichotomised stepmother is going to make us go back to this one. That and the glorious tradition of Disney's 2-D, hand-drawn animated films, we see once again. And oh, of course, pip!

Kabir Bedi talks about all things love, loss, and forgiveness

Disenchanted Review: Brilliant performances make up for a rushed narrative sans the magic