Not one to conform, Saba Azad has mastered the art of being free

As she marches to the beat of her own drum, the musician, actor, and theatre artist talks to Bazaar India on staying inspired and fearless.

The term ‘multi-hyphenate’ is much in commission these days, but for Saba Azad, a more appropriate term may be ‘shape shifter’. Saba, you see, has perfected the very delicate art of being fluid and free: from taking on her grandmother’s pen name ‘Azad’ as her stage name (Saba’s actual surname is Grewal, but the idea of freedom seemed perfect to her), to the way she plays with her looks (wigs and vintage styles command equal presence), and, of course, the very engaging live performances with her co-musician Imaad Shah under their band Madboy/Mink. Oh, and Saba also recently completed filming for the second season of Rocket Boys (Sony Liv) where she essays the role of Parvana Irani, a close companion of the nuclear physicist Homi Bhabha... There’s much on Saba’s plate and she seems to be relishing it all.

“I have my parents to thank for the kind of exposure I got while growing up,” Saba tells Bazaar India. “My mother was a founding member of a theatre group, so theatre was a part of our daily diet growing up—rehearsals, readings, costumes, and being backstage... I think I was on stage the moment I could walk!” says the 37-year-old performer, who is also the niece of the late Safdar Hashmi, the theatre trailblazer who helped found Jana Natya Manch in 1973. While growing up, Saba was drawn towards dance, and her parents encouraged her to learn Bharatnatyam, Odissi, ballet, jazz, and contemporary forms. The stage, clearly, was set for a grand future. 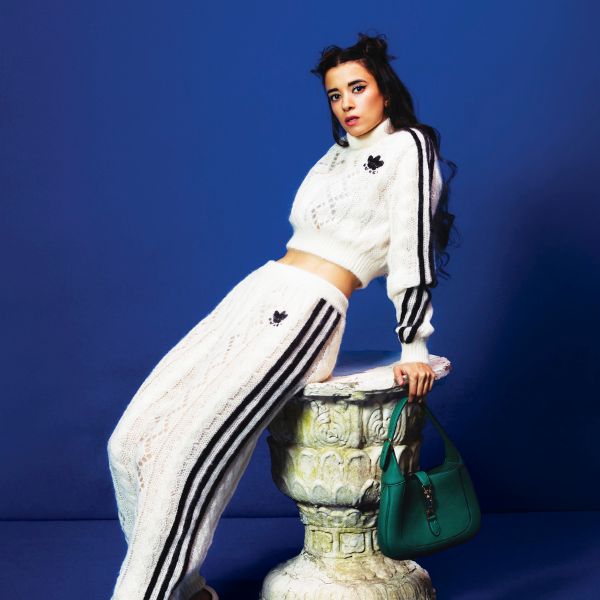 “I find that my upbringing coloured my mind to never be able to settle for anything that wasn’t creatively stimulating; it spoiled me a little, but also created a strong aesthetic that can sometimes be liberating but also self-restrictive,” she reveals. Of course, to be spoiled in creative pursuits is hardly a vice. It was one of the factors behind the rise of her band with actor/musician Imaad, that formed in 2012 and took the indie music scene by storm with its fresh sound and unwillingness to be boxed into a particular genre. “We make disco and funk and something we like to recognise as our own trademark sound that sits in a pocket between electronica and live, and resides in a sound reminiscent of another time...” Saba describes their genre. Think tracks like Lemonade, Alley Cats, and Taste Your Kiss, that have a distinct, international flare for rhythm and tune.

And while Saba won’t share the extensive list of her favourite artists (“we’ll be here for a year if I start listing that down”), she considers herself a bit old-school in her taste: “I’d listen to anything from jazz to big band to punk and funk, hard rock and blues. I can keep going...” However, the one genre she doesn’t enjoy very much is EDM. “My earliest memory of music is LPs being played by my parents at our home—they have a beautiful collection and we would listen in at all times. Music was consumed daily and in all its forms as a primary recreational activity.”

Today, she credits live acts over digital platforms to expand their audience, because of the connection they forge with their audience. And that she credits to the ability to hold their attention and have them feel what the artists feel. The most difficult aspect of music-making, according to the artist, is that often, ideas come to her like hurricanes... “It’s knowing when it’s ready for the world that can be challenging. Sometimes, it’s hard to stop tinkering and just let go,” she states.

The artist’s ultimate ability to honour her own truth is what is most captivating about Saba. She, in turn, is inspired by the “many journalists within the country who are continually putting their lives on the line for journalistic integrity” as well as “the women of the farmers movement...I don’t think I’ve ever been so inspired, there is something about being fearless in the face of oppression that deeply moves me.”

Saba Azad is here to uphold her freedom. And inadvertently, she’s encouraging others to uphold their own